Skip to content
This Government says they are the party of reduced taxes but their record says otherwise – indirect taxation has risen hugely- and they won’t clarify their tax policy after the election.

Extract from the BBC link above:

Research by the TayPayers’ Alliance says that the tax burden (that’s all taxes paid by individuals and businesses as a proportion of gross domestic product) was at its highest last year since 1981. That’s because taxes have risen as the economy has stagnated.
The figure is set to rise further, and by 2020 tax as a proportion of Britain’s economic wealth will reach its highest level since 1969.
Stamp duty on house purchases, increases in VAT, increases in taxes for higher rate payers, cuts in tax reliefs on pension allowances and rises in insurance premiums tax have pushed the burden up to 34%.By increasing the tax threshold – the point at which employees start paying tax – the government says it has cut taxes for millions.

Wiggle room
But income tax is not the only way we contribute to the state. “The government’s claims to have been reducing taxes simply doesn’t stand up to scrutiny,” said Alex Wild, research director at the TaxPayers’ Alliance.”Granted, some have been cut, but others have been raised and new ones introduced with the net result being that last year’s tax burden was the highest for 35 years.”For the average household, the amount of their income they hand over in tax has increased since 2010 and it’s deeply concerning that the government sees the need for ‘flexibility’ to increase the tax take further when it’s already set to reach levels unseen for half a century.

Our attitude to taxation has changed with the influence of Thatcherism, with over the years since 1988, a decrease in income tax and in the burden falling on those most able to an increase in indirect taxation so that those less wealthy pay a disproportionate amount of their income on VAT etc. We expect our public services to be fully funded but do not accept we should pay for them!
According to Wikipedia:

The highest rate of income tax peaked in the Second World War at 99.25 percent. It was slightly reduced after the war and was around 97.5 percent (nineteen shillings and sixpence in the pound) through the 1950s and 60s. 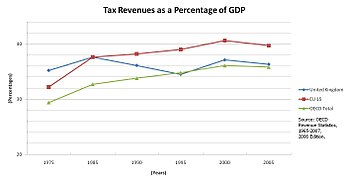